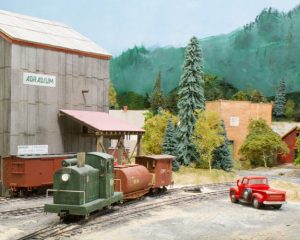 The Rogue Valley Model Railroaders’ 1980s layout featuring the former Pacific & Eastern of Southern Oregon. The club models what the railroad might have been if its story had continued into the 1980s. The large layout is in HO scale and can be visited at the Medford Railroad Park in southern Oregon. We share photographs and video along with the story of the layout and an interview about the layout. We also share a video of a ride on a 7.5″ gauge live steamer at the railroad park and an interview about its operations.

Creative Survival in Northern Idaho in On30

Visit the whimsical, freelanced town of Ohadi and its two railroads: the Idaho, British Columbia and Northern Railway and the Ohadi Street Railway. On this 1950s layout, the residents of Ohadi have come up with a clever way to prosper and created a whole new industry to support the local businesses and the railroad. The layout is built by Richard Hutter in On30.

Build an Easy Rock Pathway
If you made the rock texture sheet with us last month, use it this month to build your own stone pathway. The project is simple and easy enough for newer modelers to complete.