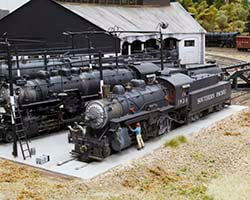 Tom Dill’s HO scale Southern Pacific layout is centered in the town of Ashland in southern Oregon. He models the railroad from 1948 to 1952 from Medford south to the Siskiyou Summit. Tom’s excellent modeling provides a scenic look into the SP’s history in the region. He runs predominately steam locomotives (though you will see some diesel power) and many of them are highly customized. With some necessary license taken, Tom operates the layout according to the prototype and models the towns of Ashland, Belleview, and Steinman and a stop in Foliage. He frequently runs 2-10-2s up the steep grade toward the Siskiyou Summit. This feature includes an article about the layout, a video of trains running, and a map.

This N scale layout is modeled by the Tualatin Valley Model Railroaders and the Portland Area N-TRAK clubs. It was originally a portable N-TRAK modular layout but is now static. The clubs are rebuilding the whole layout, which is 24×33 feet. The Dairyville Pacific is located at the Alpenrose Dairy in the Hillsdale area of Portland and can be visited. It is based in the Columbia River Gorge of Oregon and is not specific to a particular railroad (since club members have varying interests) so you will see a variety of motive power in operation. This feature also includes photographs, an article, and a map.

Our project this month is the first of two parts. We will show you how to make an operational gate and a chain-link fence, beginning with the gate this month. The gate is sturdy enough that you can open and close it now and then to stage a scene. The materials are not expensive, but the project does require a little patience and the willingness to work with small parts.