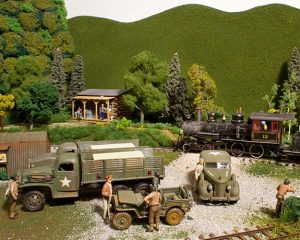 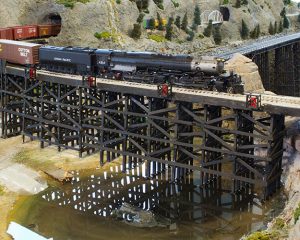 Stoney Creek Southern Railroad in On30
Visit WWII-era northeastern Tennessee on Lee Bishop’s Stoney Creek Southern Railroad. The freelanced layout is based on a mythical version of history and has ties to the area’s history. It runs East Tennessee & Western North Carolina Railroad power, hauling commuters from Elizabethton to Buladeen and supplying various goods to the towns of Winner, Hunter, and Sadie. Lee is a history buff and enjoys mixing his love of history with his love of modeling, adding many historically appropriate details on the small narrow gauge layout. Lee runs 4-6-0 Baldwins on the layout, which is based in 1943. We share photographs and video of the layout along with an article detailing his pike.

Camas Prairie Railroad in HO
The Camas Prairie Railroad operated in northern Idaho and was jointly owned by the Union Pacific and Northern Pacific Railroads. We feature a freelanced version of it this month built in HO scale by the Lewis-Clark Model Railroad Club of Lewiston, Idaho. The club is loosely based from the 1950s to the 1970s and runs a variety of steam and diesel power. Diesel fans will get to see a few newer locomotives that we ran during our visit, as the club is not strict about the era. The layout’s hub is in Lewiston, Idaho, and the line runs east through Cottonwood and up into the Craig Mountains. This feature also includes photos, video, and an article.

On30 Stoney Creek and Southern Railroad

This website uses cookies to improve your experience while you navigate through the website. Out of these, the cookies that are categorized as necessary are stored on your browser as they are essential for the working of basic functionalities of the website. We also use third-party cookies that help us analyze and understand how you use this website. These cookies will be stored in your browser only with your consent. You also have the option to opt-out of these cookies. But opting out of some of these cookies may affect your browsing experience.
Necessary Always Enabled

Any cookies that may not be particularly necessary for the website to function and is used specifically to collect user personal data via analytics, ads, other embedded contents are termed as non-necessary cookies. It is mandatory to procure user consent prior to running these cookies on your website.