The two layout features this August are:
Kirk Thompson’s
The Montana Rail Link Over Mullan Pass 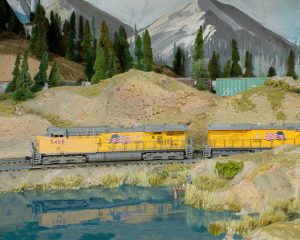 The Montana Rail Link on Mullan Pass in HO
Come see the Montana Rail Link’s modern operations over Mullan Pass on Kirk Thompson’s HO scale layout. Watch the BNSF and MRL in action, hauling heavy freights up the grade. The layout models the line from Laurel to Missoula with a focus around Helena. Just like the prototype, Kirk runs helpers to assist the trains as they climb the Rockies. This feature includes photos, video, and a cab ride.

Union Pacific Overland Route in N Scale
Watch the Union Pacific at work as it hauls freight across the country from Nebraska to the west. Bob Bjerke’s N scale layout is a busy railfanning layout featuring heavy traffic and a variety of scenery along the long route. The multi-unit lash-ups haul all sorts of goods on this unusual three-room pike. We include video and photographs of the layout, as well as hand-drawn maps.

Build an O Scale Coal Bunker
We build a portable coal bunker from scratch this month using inexpensive materials. We will show you how to build the bunker and create a realistic coal load for it.